The depth of the letter comes from a “channel” or a wall.

Standard channel letters are 70-80% of the letters installed. These light the front.

Reverse Channel Letters project light to the back. These are also called “Halo Letters” or a “halo effect” letter or back lite letters.

Who uses Channel Letters? Most channel letter users are using these signs at night. This makes sense for businesses that are : high profile or open after dark. Restaurants, stores, clubs, bars, department stores are all good candidates. Many large companies want their name know and these signs do exactly that. Businesses that only work during the day are much less likely to use or need channel letters.

Light sources - There are 2 light sources: Neon and LED. Neon is less expensive to make and found in all the older installations. Neon has been around since 1910 and was popular from the 1920 through the 1960s. Neon is disappearing rapidly. While currently less expensive to produce, LED pricing is coming down quickly.  Neon required a high voltage transformer and high energy consumption. Properly made, neon will last for 20-30 years, but some neon is much older. It comes in a range of colors and the shapes are made to fit. The tube diameters and typically 15 mm. Smaller tubes require more power to produce the same light. The tube diameters have driven the width on channel letters in the past. Channel letters are typically not narrow and avoid fine points and curves because the Neon supporting these cannot conform to these shapes. Neon is an art form and there is a nostalgic renaissance occurring as the mainstream uses disappear.

LEDs: LEDs have a number of advantages. They consume less electricity, they are smaller, they can be brighter, they are not fragile and they do not require the heat, melt and bending skills of Neon. The return is they are easier to get, use and are taking over as a light source in Channel letters.

What is a Raceway? – A Raceway is a long box that can be mounted at the bottom, the middle or the top on the letters. It is normally at least 3.5 inches deep. Raceways are normally the same color as the wall behind them.

Waht to know more about lighted signage or channel letters?? 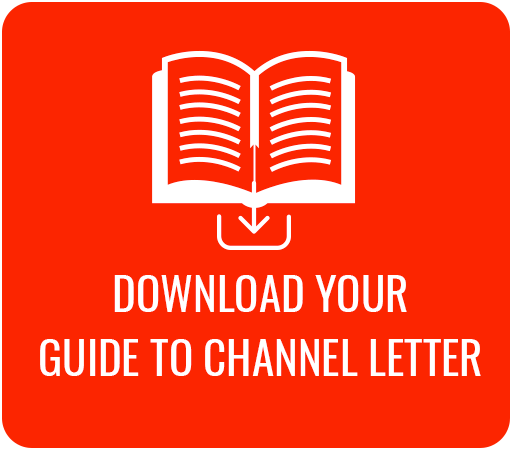 Whether you need a channel letter set, a monument signs, ADA signs, wayfinding signs, lobby signs, or any other type of commercial building signage, we can help! Signs for San Diego is the best sign company for building signs.